Shin-Sangokushimai (The True Sisters of The Three Kingdoms) is a new light novel series written by Mikage Kasuga who is known for his previous work Oda Nobuna no Yabou. The light novel is illustrated by Won (Rakudai Kishi no Cavalry) and published by Fujimi Fantasia Bunko. The first volume will be released on February 20, 2018. 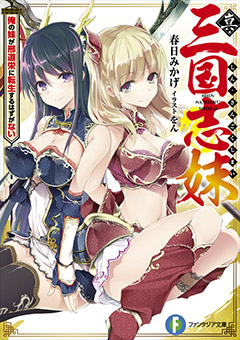 High-schooler Shuuichi Mizuki and his sister-in-law Nanami are summoned as Liu Bei and Zhang Fei to the world of Romance of the Three Kingdoms!? Furthermore, his sister who has been separated from him since birth, Yukino, is also summoned as Guan Yu. In order to ensure his sisters’ survival, Shuuichi fights by making use of his Three Kingdoms knowledge and his ability as a hero!

One thought on “Shin-Sangokushimai (True Sisters of the Three Kingdoms)”