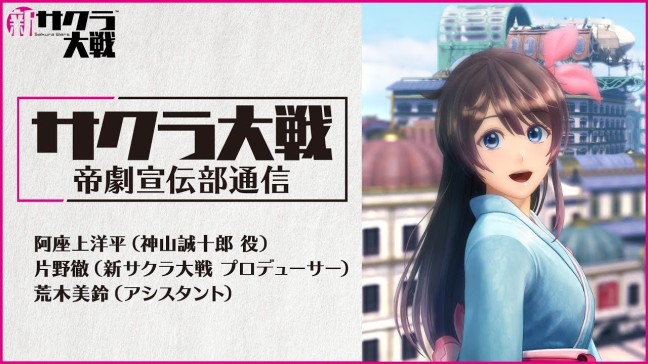 The stream will be broadcasted live on June 26, 2019, 20:00 JST. The stream will be hosted by Yohei Azakami, the voice actor of Project Sakura Wars’ main protagonist Seijuro Kamiyama. Misuzu Araki will act as an assistant MC, with producer Tetsu Katano also attending the stream.

You will be able to watch the stream here:

Project Sakura Wars is an upcoming cross-genre video game developed by Sonic Team and published by Sega for the PlayStation 4. The sixth mainline entry and a soft reboot of the Sakura Wars series, the game is scheduled to be released in 2019 in Japan and 2020 internationally. It is also the first Sakura Wars game not to be developed by Red Entertainment. The gameplay combines overlapping tactical role-playing, dating sim and visual novel elements.

The game takes place in a fictionalised version of the Taishō period in 1940, where the World Combat Revue Organization fights against those who threaten peace around the world. Naval captain Seijuro Kamiyama is transferred to Tokyo, where he must lead the struggling Imperial Combat Revue through a worldwide tournament of Combat Revues and fight the demons once again.

Development of Project Sakura Wars began in 2016 after a positive fan response at that year’s Sega Fes convention. A combination of new and returning staff were involved in development; these include veteran composer Kohei Tanaka, scenario writers Takaaki Suzuki and Jiro Ishii, and character designer Tite Kubo. The anime sequences were produced by Sanzigen. The game was first announced at Sega Fes 2018. It was the first mainline entry in the series since Sakura Wars: So Long, My Love (2005).