After restlessly waiting for the next Oregairu volume and experiencing the terrible quarity ride that is Qualidea Code, I guess it’s relieving that Gi(a)rlish Number finally aired its first episode yesterday night on TBS. For English viewers, the simulcast will be out next week. UPDATE: I did a quick sub on this here. 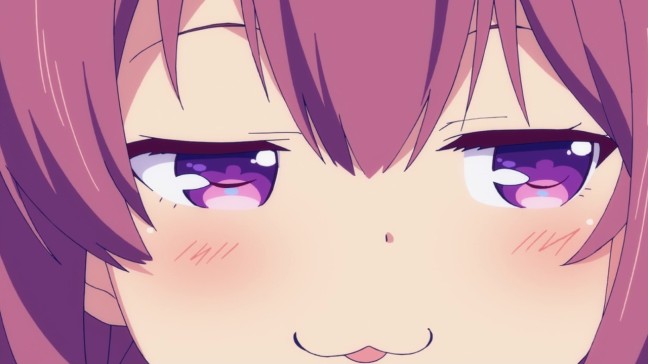 For those who aren’t familiar with the title yet, Gi(a)rlish Number is ASCII Media Works’ multimedia project with Wataru Watari as the original creator — yep, the author of Oregairu and co-creator of Qualidea Code. The original character designs and cover illustrations for this series are provided by the illustrator duo unit QP:flapper (Tometa Ohara & Koharu Sakura), while the novel illustrations are done by Yamcha.

Gi(a)rlish Number’s novel is serialized in ASCII Media Works’ monthly magazine, Dengeki G’s Magazine, while its manga is serialized in Dengeki G’s Comic. Watari himself is in charge of the anime’s series composition, collaborating with director Shota Iwata. Character design for the anime is done by Sumie Kinoshita, who also designed the characters for Dantalian no Shoka. The animation studio handling the production is Diomedea(Handa-kun, Kancolle, Shinyaku! Ika Musume!, Campione!).

The story follows Chitose Karasuma (CV: Sayaka Senbongi), a college student who aspires to become a voice actor and faces the weird reality of the seiyuu industry. Chitose mainly hangs out with fellow voice actor and her best friend Yae Kugayama (CV: Kaede Hondo) and occasionally pushes her big brother and manager, Gojou Karasuma (CV: Yuichiro Umehara), to a corner with her attitude. Other seiyuus in the story include Momoka Sonoo (CV: Eri Suzuki), a high school idol seiyuu whose father is a well-known director and mother a famous seiyuu; Kazuha Shibasaki (CV: Saori Oonishi), an idealistic seiyuu who prefers to be cast in a serious anime; and Koto Katakura (CV: Yui ishikawa), an outgoing seiyuu who always speaks in Kansai dialect and is also an otaku. The series portrays the world of animation and seiyuu in a satirical way, addressing several “rotten” aspects of the industry through the characters’ perspective in a way those familiar with Wataru Watari’s works may expect. 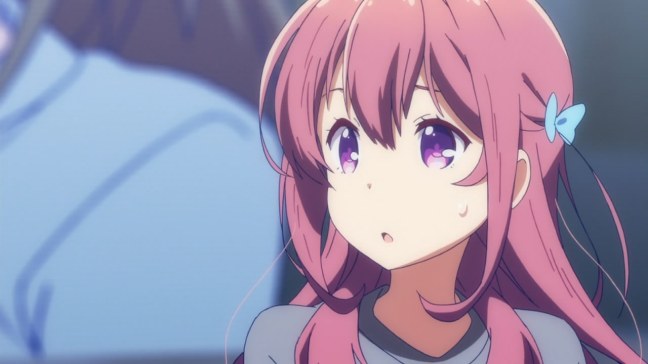 I’m pretty surprised that the anime doesn’t take the same route as the novel and the manga which showed Chitose’s daily life filling in as a “mob” character and explained her background story — instead opting for an adaptation of the one-shot chapter of the manga (the one before serialization) with slight changes. The anime started with a “mini live” right off the bat featuring Momoka and Kazuha singing. The animation of the live is really well done, though, so no complaints there. Listening to Momoka singing here also reminds me of Eri Suzuki’s other role, namely Deremas’ Yuko Hori. 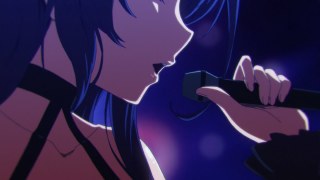 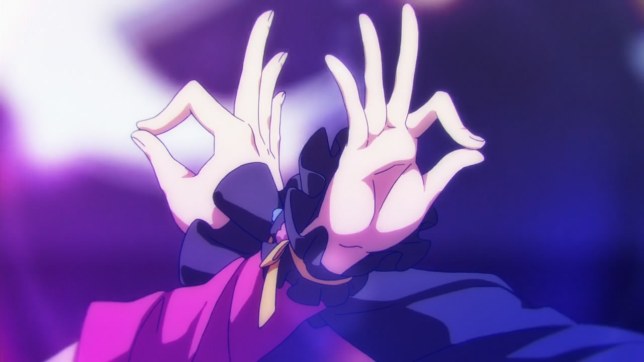 We saw Chitose gleeing at the Twitter users’ comments about her appearance at the live, followed by the staff greeting the performers from the stage. We could also notice Kazuha’s dissatisfaction which became a topic among her peers. Chitose’s brother Gojou is finally introduced seconds later; his design is probably the one with most alteration compared to the original one. The episode also didn’t touch anything about Gojou’s past as a seiyuu. 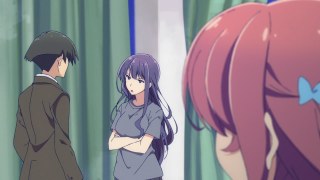 We are then treated to the scene of Chitose chomping on yakiniku after being invited to a feast. Diomedea sure showed a dozen amount of top-notch animation here, and the quality didn’t falter throughout the episode. We are also introduced to several staffs in charge of the anime they were working with through the dialogue, although not much importance was shown in these characters. We did have our first look at the laid-back producer Kuzu-P (CV: Kazuya Nakai) though. 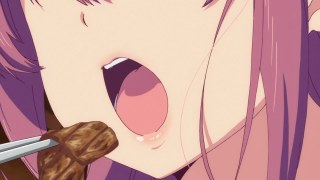 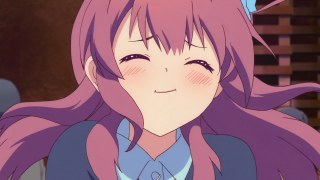 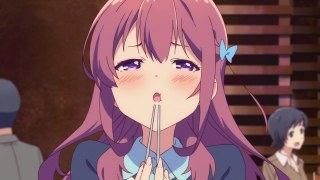 The next few scenes explored the siblings’ exchange at their home, with Chitose throwing some of her complains about her current job. Seeing her rehearse her lines for an episode which only consists of a single phrase, “eh, really?!” is pretty hilarious, followed by her critique on the storyboard’s lack of details on the character’s expression. This brought me back to one of Shirobako’s episodes when one of the production assistants remarked that the director’s storyboard drawings are off. Another thing would be Chitose’s dejection upon being introduced to a light novel-based anime, openly subjecting it to her overt generalization that “it’s probably a bad role anyway.” With all those remarks of hers, though, it’s pretty hard to hate Chitose when she keeps making adorable expressions. 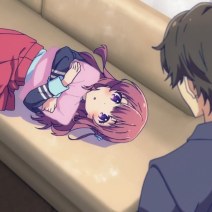 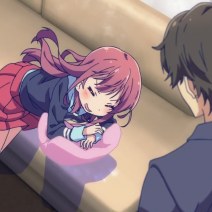 Another highlight in this first episode is Momoka, the high school idol seiyuu with multi-faceted personality. Coming off as a proud young talent with influences from her parents, we could see that she has as sharp a tongue as Chitose does, if not sharper. And so, as weird as it is, a friendship(?) bloomed between both of them. “Your acting is trash, but your character is interesting.” Momoka is fucking savage, indeed. Also, thinking that Wataru Watari wrote these self-depreciating lines about light novel authors is pretty ironic, seeing as his works that have gotten adapted into an anime are all light novels in origin.

“I think light novel authors are misunderstanding something. Even though their work  only sells because of the illustration, eh…”

“Those people can’t draw, produce music, nor act, and yet they want to be a part of this industry. My dad often tells me that.” 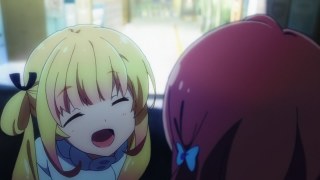 Kuzu-P is a departure from the image of Shirobako’s Nabe-P, another portrayal of an anime producer. Unlike the latter though, Kuzu-P shows little regard in the quality of the voice actors by assessing them firsthand, instead relying on his “gut feeling” to determine what sells in the current market. In the end, he offered Chitose a main role in an upcoming anime series simply because he saw her eating yakiniku the other day. I personally wonder if there is a real anime producer out there who names the lead role for his project from pure instinct. 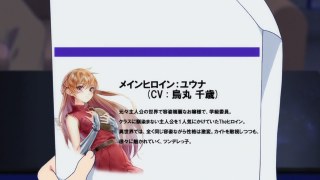 Overall, Gi(a)rlish Number went through a pretty smooth start. While the way things are unfolding differ with the novel & manga, the series still feels very much like what it intended to do and I’m curious about the continuation. It’s pretty sad that Yae didn’t make an appearance this time, but she’s shown in the next episode preview, so all is well. I do wish that Watari doesn’t try to hard to make the anime too serious, though; the overall tone is good as-is, and unnecessary melodrama is not fit for a show like this.

Unlike Shirobako, Gi(a)rlish Number is less a “fictional documentary of the animation industry” than it is a satire on several preconceptions that people have about said industry; its jabs are not meant to be taken too seriously. If you want a taste of Sore ga Seiyuu that focused more on the irony of the seiyuu world, or are simply here for cute girls showing tons of cute reaction faces, this show is probably for you.

As a bonus, have a dose of Chitose’s facial expressions. She’s probably my “emoticon girl” of the season after Macross Delta’s Freyja is gone. 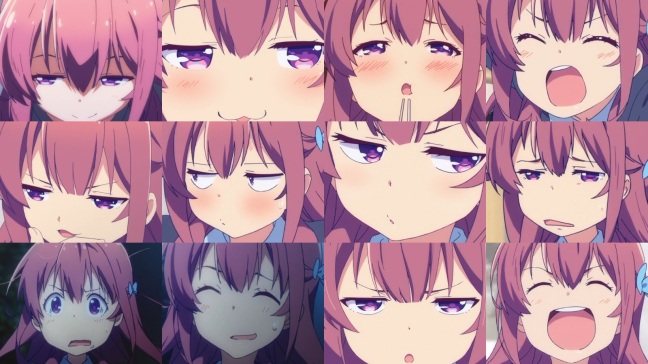