The BanG Dream! (Bandori) franchise started taking flight in 2015 as a media mix project centered around the theme of all-girl bands. The main appeal of the franchise is that all the voice actresses of the characters forming the band Poppin’ Party (Popipa), which serve as the backbone of the story, are capable of actually performing the songs live with incredible quality.

Following the release of the television anime series in January 2017, the mobile game based on the franchise titled BanG Dream! Girls Band Party! (Garupa) was released in March 2017 while Popipa performed at the famous Nippon Budoukan for the first time in August the same year. In this interview, we delve into the mind of Takaaki Kidani, the man behind the creation of the BanG Dream! Project, as we talk about what lies ahead for the franchise.

This interview is divided into three parts; click the following links below to read Part 2 and Part 3.

The Current State of the Entertainment Industry in the Eyes of the Top Runners, and How to Compete in It 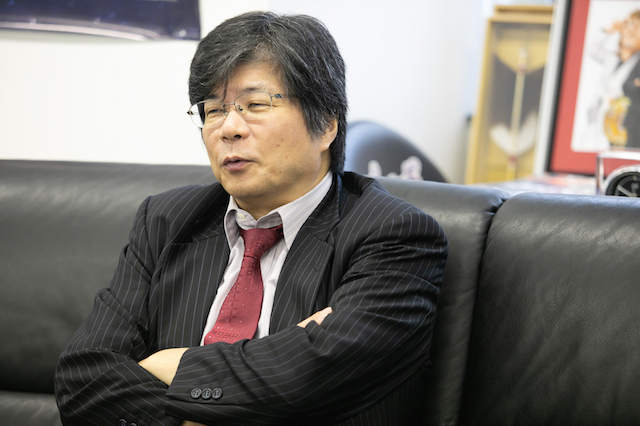 —Kidani-san, you have been doing business closely related to the otaku culture since the 90’s. I think the number of people who enjoy this so-called otaku culture has been increasing over time.

Kidani: Certainly. However, I think the entertainment industry nowadays is jam-packed with supplies. On one hand, the idol industry is already completely saturated, while the anime industry will probably face a decline in two years. In such times, I’m making full use of YouTube’s “Bandori Channel” in order to push BanG Dream! forward. We uploaded a lot of songs in full version there along with advertising our contents. Our method of promotion has shifted to using music for promoting the whole franchise, as a response to the way the amount of information in the world is exponentially increasing.

—Can you explain further?

Kidani: For example, in the case of sports newspapers, the declining sales of printed newspapers are compensated by the increase of the commissions received from news sites like Yahoo! News for re-sharing the news. I’ve heard of people who watch the television all day long to write a transcript of all the news from that day. This means that a single piece of information will eventually be split into multiple news. Due to the existence of social media, the amount of information being spread worldwide is increasing at an accelerating pace. There is no way one would be able to win in this competition by using the same method of promotion. Not without a great deal of these three aspects: intelligibility, reach, and appeal. Even so, I’m still seeing a lot of works being released which make use of the same promotion method as before. I think that’s why there are a lot of good anime which ended without ever being able to garner any acclaim. I think it’s a shame that they chose to leave things the way it was even though they still had room for trial and error, only for reasons like “we can just recover half of our sales from China”.

Kidani: Yes. For BanG Dream!, we are eager to collaborate regardless of the field. We want to accommodate everyone from the most die-hard fans to the general audience.

—You have created a number of original projects like BanG Dream!. When do you usually come up with these projects?

Kidani: It depends. Sometimes I come up with one when I’m taking a walk, or even when we are talking like this. Therefore, there’s no such thing as “when”. There are times when I feel like I’ve caught on a hint while still having trouble assembling the pieces, though. Then, there comes the moment when I’ve finally found that piece I am looking for… One of the projects I recently thought of had one of these moments. I still can’t announce the project yet at the moment, since I’m still figuring out several measures. (Note: Kidani was likely referring to the recently announced “D4DJ” media mix project.)

—Can you tell us the background behind the creation of the BanG Dream! project?

Kidani: As we manage the “Love Live! School Idol Festival” mobile game (as a publisher), we are aware of the potential of music and character-focused franchises. Starting from there, I had been thinking all the time, “is there something else?”, but I couldn’t think of a concrete project yet. At that time, Aimi who is a part of THE iDOLM@STER: Million Live! performed live while playing the guitar at the Saitama Super Arena (during “THE IDOLM@STER M@STERS OF IDOL WORLD!! 2014” event), and the venue was filled with the audience’s overwhelming cheers… or so, as my staff told me. I think there were two reasons for that.

Kidani: Yes. The first one was the fans’ way of showing their gratitude, “Wow, she went all the way to portray the character!” And the second one was an expression of surprise, “Wow, a voice actress can actually play the guitar.” That staff then told me, “I want to see Aimi in an all-girl band!”, and then I said “If we’re doing it, there is no point unless we’re making a franchise!”… And so, that was the start of us making a character-focused franchise about all-girl bands. Then, I figured that “if the girls can’t play the instruments themselves, there’s no surpassing the likes of K-On! or The Melancholy of Haruhi Suzumiya,” so I started from searching for voice actresses who can play the instruments… That’s why, Popipa’s character designs are somewhat similar to the voice actresses themselves, aren’t they? That’s because we decided on the voice actresses in advance. At the same time, I asked Kou Nakamura-sensei to work on the world-building and the characters, with the manga series to debut in the Monthly Bushiroad’s February 2015 issue and the first live to be held in April the same year.

—And so around that time, you managed to assemble them.

Kidani: That’s right. (Ayasa) Itou was the only one who completely had no experience in playing an instrument. (Rimi) Nishimoto, on the other hand, was a finalist in the Milky Holmes Feathers audition. I thought she had something special back then. When I was assembling the cast, I thought, “now that I think about it, that girl can play the bass,” and called her on the phone. “See, I have this project I’m working on, do you want to join?”

—Straight from the Kidani-san himself.

Kidani: Yes. She then replied, “I am interested!”, so we discussed the matter directly and she ended up joining the band starting from the training camp… But, when we were at the Tokyo Game Show last year, she told me, “The instrument I played during the audition was actually a guitar, not a bass!” (laughs) However, it seems she actually had experience with several instruments including the bass before.

—I see. So the fact that she had this musical sense in her was what left an impression on you.

Kidani: That’s true. Of course, I also saw her potential to grow as a voice actress.