Ryuuou no Oshigoto!’s second episode is here, and it didn’t take long for the show to hop into the action we’ve been waiting for. Oh, and a lot of loli screentime.

The episode begins with a chuunibyou-esque depiction of Yaichi and Ayumu’s match, which is cut into the opening before the match continues. We get to listen to Yaichi’s monologue about the match as he comments how he needs to put up a fight that won’t disgrace the Ryuuou title. We are also quickly shown that Ayumu’s family runs a tofu shop, a detail which will prove pivotal later on. However, we don’t really see much of the match as things are quickly cut into the break. Yaichi left Ayumu alone to have lunch with his disciple. 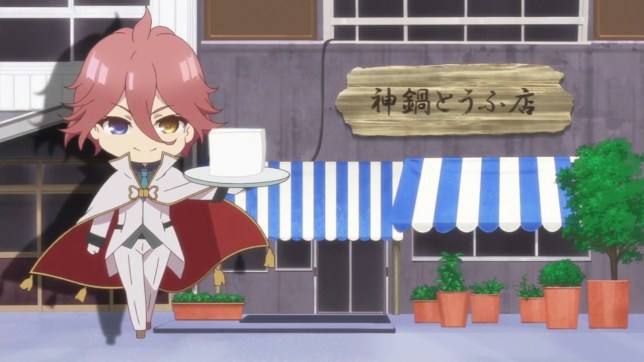 My personal highlight of the early scenes is the reporter present in Yaichi and Ayumu’s match, Kugui, who is actually the Yamashiro Ooka female title holder Machi Kugui (voiced by Sayaka Senbongi, who was also responsible for Kabaneri’s Mumei and Gi(a)rlish Number’s Chitose Karasuma). While her real major appearance in the light novel was on the fourth volume, she has actually had a subtle appearance early on (which is this exact scene).

Yaichi who visited Ai encountered one of the girls that she just fought at the dojo, who introduced herself as Mio Mizukoshi. Mio who seemingly idolizes Yaichi asked for a handshake, which Ai wasn’t exactly happy with. She did grab Yaichi’s hands afterwards, so all is good, I guess. Take a hint, Yaichi! 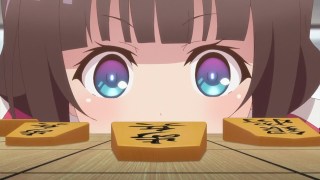 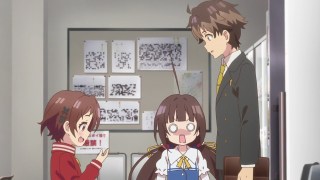 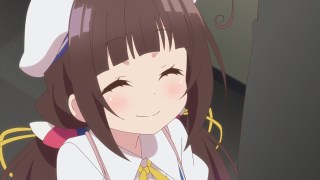 As the two are having lunch, Ai asked Yaichi how the match is going, and Yaichi talked about how shogi research is very important in the current world of shogi and explained that the next move he has prepared against Ayumu is the fruit of that research, which amazed Ai who thinks of it as some sort of “secret weapon”. Ai asked him if the move will be enough to make Ayumu surrender, to which Yaichi denied, saying it would probably turn the situation into a stalemate. As they are done having lunch, Yaichi told Ai to come back home with Keika as he returned to the match. 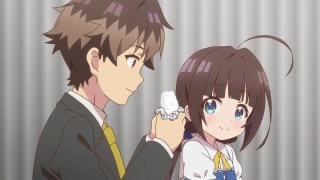 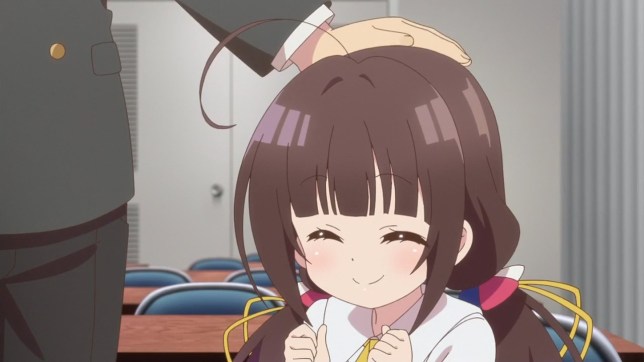 As Yaichi returned to his match, we get to see more of the chuunibyou-driven action as the two traded blows with their strategy. However, when Yaichi thought he had successfully ensnared Ayumu with his strategy, it turned out that Ayumu had predicted it all along. With his plan ruined, Yaichi’s self-depreciating thoughts started driving him into forfeiting the match, as he played a move to create an impression of “losing honorably”.

However, Yaichi finally noticed one thing: his disciple has been watching his match all this time. Still not giving up on his master, Ai kept on looking for a way to check Ayumu’s king as she looked at the board. Ai’s earnest faith in Yaichi made him realize that he had been consumed by his self-depreciating thoughts and the weight of his title, which finally strengthened his resolve to fight until the end. 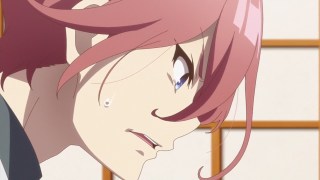 The match ended with Yaichi’s victory, which also marked the end of his losing streak in an official match. Coming home together with Ai, Yaichi revealed that he had exploited Ayumu’s weakness: since Ayumu can’t stay up late at night, Yaichi was able to drive him into making mistakes near the end of the game. Yaichi who thought he was going to get bashed again for winning with a cheap trick was genuinely surprised by the positive comments online. Yaichi who had stopped worrying about other things and finally been able to play his very own kind of shogi finally remarked that having a disciple isn’t so bad after all.

So… the second part of the episode. The birth of the JS (Joshi-Shougakusei; lit. elementary school girls) research group. This part is definitely the real highlight of the episode. But before that, we are treated to bits of Keika’s background story. Being so close to the age limit of entering the female pro scene, Keika who is currently 25-year old struggles to make the jump from class C2 to C1 of the training group. We are definitely going to see this conflict explored in more depth if the third volume got adapted, but that’s for another day. Anyway, the scene ended with Yaichi’s “confession” being flatly rejected by Keika. 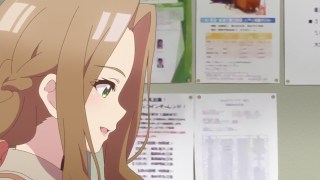 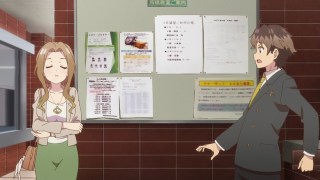 And now, it’s the part most people have been waiting for. Ai invited three of her friends from the dojo to Yaichi’s house: the cheerful Mio Mizukoshi (who was introduced earlier), the soft-spoken Ayano Sadatou (who is the junior of Machi Kugui; they are learning from the same master), and the 6-year old French girl Charlotte Izoard. 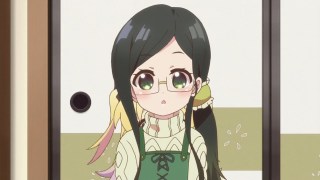 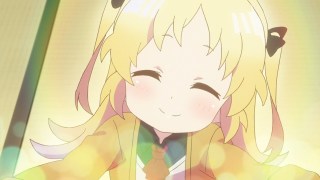 It seems they deliberately skipped the Kanazawa Curry scene to maximize the screentime of the three lolis. And I guess I can’t blame them, Char is an angel. 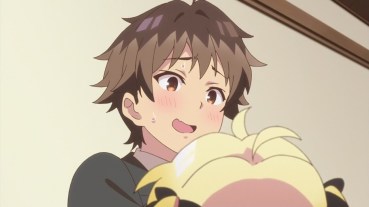 And so after a night of shogi, Yaichi got caught by Ginko in yet another unfavorable position as his reputation as a Ryuuou is put at stake. 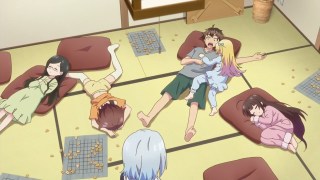 The last part of the episode is the appearance of Ai’s parents: her dominant and authoritarian mother Akina Hinatsuru (voiced by Mitsuko Horie), and her more submissive father Takashi Hinatsuru (voiced by Ichirou Mizuki). As her parents expressed their intention to take Ai home and Yaichi tried to convince them to let her continue playing shogi, Ai’s mother comes with a condition: if she can win all three matches in her training group test, she will permit her joining the training group. Unreasonable as it may sound, Yaichi is forced to comply with the condition as Ai vehemently declare that she is going to win all the matches. 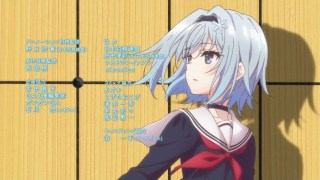 The ending theme song “Mamoritai Mono no Tame ni” is performed by Miku Itou, a voice actress and singer who is also a member of the anisong idol unit Pyxis. The ending sequence heavily focuses on Ginko—a choice that I find a bit iffy considering the show’s pacing doesn’t really hint at a possible adaptation of volume 6, where Ginko becomes the main focus. It also feels a bit counter-intuitive when the marketing so far has been pushing Ai a lot as the main heroine. Regardless, the animation still looks solid.

Starting from the positives, this episode has been a terribly fun ride. Without relying on excessive explanations on complicated shogi terms, I think they are pretty successful in presenting the match in this episode quite well. We are also treated to lots of adorable moments in the later half, especially with the JS-Ken bit adapted. It’s really satisfying to see the girls finally get animated, especially Char. Yui Ogura’s performance really nailed her character. The way they are cutting the episode right after Ai’s parents’ part also serves as a pretty nice cliffhanger for the next episode.

However, I do think they are sacrificing some aspects of the story in favor of the fanservice we got this time. Yaichi’s first match in this episode is supposed to be a very important moment of catharsis for Yaichi, where he went from someone caught by a losing mentality due to the massive amount of pressure from the title to being able to finally play his very own kind of shogi. This important change is especially highlighted in the original light novel and the manga adaptation, as we have been made to understand his circumstances better in the earlier parts of the story. In this case, I think the problem really stems from the lack of Yaichi’s characterization in the first episode. The lack of clear understanding on Yaichi’s character ends up causing some sort of “character assassination”, reducing him into the kind of “one-dimensional protagonist” people have come to look down on. Kugui’s narration on her report of Yaichi’s match could have helped redeem things a bit, but it seems they also decided to cut it down. It’s really a shame.

Another thing that I’m kind of disappointed with is the lack of references and homages in the episode, even though this episode (and to be honest, the whole story) is supposed to be a goldmine of references, both to Japanese pop culture and the world of shogi. I wonder if it’s a problem of copyright, though I personally doubt it since the original material is positively embraced and supported by the Japan Shogi Association.

All in all, the second episode is still genuinely entertaining, and I believe it’s something the anime-only watchers can also experience. However, it saddens me a bit that the original story’s depth has been altered to accommodate certain things. This treatment of Yaichi’s character in the first two episodes has been sort of disconcerting for me; and while this may come off far-fetched, I don’t really see a second season happening if they are going to keep on going at it like this. Then again, my fingers are crossed.

As usual, have a smiling Char as thanks for reading all the way until the end.