As part of its 20th year commemoration, visual novel studio “Key” known for its well-known classics like Clannad, Air, and Little Busters! has released a special website to celebrate the occasion. The website also features a message from none other than Key co-founder and writer Jun Maeda, reflecting on the company’s years of endeavors in the industry. 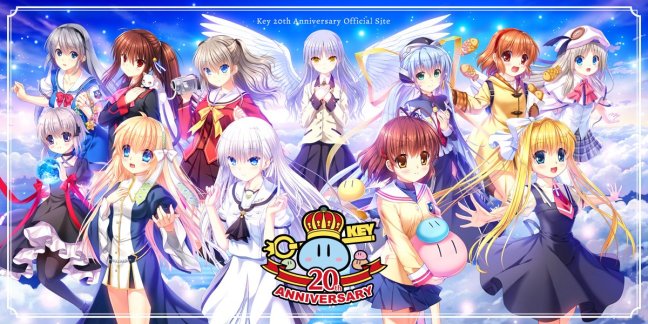 The following is Jun Maeda’s message, translated to English:

You may think it’s odd that we didn’t make any announcement this year, despite it being Key’s 20th anniversary.

But, I personally think it’s amazing that a single game brand can last for 20 years and beyond.

In the current age when the culture of playing visual novels on the PC has begun to die out, surviving in the industry is a difficult task to accomplish.

We managed to hold the “Key 10th MEMORIAL FES.” event during our 10th anniversary, but the current situation is completely different compared to back then.

It may be unbecoming of me to say this, but we couldn’t go with the same grandiose approach this time. Coming up with a website like this alone took everything we got.

Despite that, our latest work “Summer Pockets” released last year was very well-received, and it did serve as a great baton pass for us.

And thanks to that, we got the motivation to liven things up for the occasion, this time around.

In order to prepare for the day when the fans can proudly say “I’m glad to be a Kagikko!” in the future, I will do my best with the rest of the staff.

Along with the message, Key also features a complete timeline of the company’s history, right from its formation in July 21, 1998 until now. A special soundtrack collection album featuring 50 discs of Key-related songs has also been planned for September 2019 release, titled “KeyBOX -for two decades-“. The soundtrack CD will be up for pre-orders starting from July 1, 2019 until August 1, 2019. It will also contain a 280-page booklet and a special case featuring an illustration depicting Key’s famous characters. With over 560 songs specially picked to represent Key’s long history, the collection will surely be a pleasant gift for Key fans.

More details on the “KeyBOX -for two decades-” pre-orders will be updated on a later date.